What’s the deal with feminist art?
“Feminism, as an art movement is over. All the issues of feminism have been solved”, said a classmate in one of my lectures once.
I’m still an art history student after all these years. I just can’t get enough of art history or student loans.
It’s a strange subject area in which to involve yourself because most of the study leads to teaching (check) or gallery work (it did) or if you are really lucky, working within an arts prize (yes) and writing about artists (uh-huh) but it does not lead to lots of cash, heady fame or multiple properties dotted around Auckland.
It does, however lead to interesting debates, if that’s your thing. Wallace Chapman-esque debates at a wine bar – not usually about artworks, but explaining art to tipsy friends who say things like “I don’t know much about art, but I do know what I like”.
A common question would be “The Renaissance. What’s that all about then?
I had that the other day. Someone asked me what ‘that’ feminist art was all about – and why was it even needed in this day and age? And why was it always quite gross and kind of icky? They were quite angry and uncomfortable even talking about it. A little bit suspicious even.
My response was that the female experience itself is often quite gross and kind of icky. There are stories that speak of atrocities, rape and death for being female. These stories are ongoing. Just because we are possibly all sorted here in the North and South Island of New Zealand, doesn’t mean it’s all over, right?
There are female artists dealing with feminist issues who are reluctant to airbrush art to fit in with academically accepted norms (established by men, long ago) if they hope to effect change.
What changes? What is a female? What is her function? Is there a representation of women in art history beyond biology? And yes, feminist art is sometimes icky.”
Take Georgia O’Keeffe for example. Her large vulva-esque flowers were rather arresting and if you felt repelled by stylised forms of a woman’s private parts, then wasn’t that saying more about you than the artist? Good art confronts you, apparently.
Same again with Judy Chicago’s The Dinner Party (1979), where a triangular table is set for dinner to celebrate mythical and historical women who had largely been left out of the history books, but had made a phenomenal contribution to cultural belief, science, medicine and so on. At each setting was a ceramic dinner plate, lovingly made, shaped by all accounts like a vagina. The public reaction at the time was overwhelming – revulsion was one such reaction – and the connotation that one would sit down and eat…oh never mind. It was all too much then and the debate was set: how should ‘female’ be depicted in art?
Audiences had been exposed to male genitalia forever in art – it was a symbol of dormant power to depict a male marble form but what about a woman? Was she merely positioned to attract the male gaze and for titillation and not much else? Were the readings of the nude the same for men and women? And has this even changed an iota?
The Dinner Party had its faults, one of them being that it excluded the male audience. Whether this was deliberate or not, men did not plug into the feminist experience by viewing this work. If anything it confirmed their belief that women had gone crazy. This is the paradox of feminist art.
When we redress an imbalance by using the same visual language, we can exclude the very audience we wish to educate. The other problem was women taking the stance that men needed education. There’s no success in patronising someone to the point they turn away from your argument.
How did we then apply the same visual language to male subjects? Did we sexualise them too, for the female gaze only? So the women could have a turn at having a look? Doesn’t this defeat the purpose of addressing objectification?
I do not think that the male and female form can ever be removed entirely from preset histories. We can revise and redress, but ultimately there are two certainties. Men are often depicted as heroes; women are tied to their biological function. Much of feminist art still processes this latter notion, whether directly shown or implied.
I know there are exceptions to this. In modern visual culture though, have the stereotypes been corrected? Fiona Pardington, a New Zealand photographer, has made some very sexualised images of male subjects. But at the end of the day these guys put their clothes back on and go back into the world as men, leaders, powerful and heroic. Can this be said of the naked female sitter? Where does she go next?
No wonder it’s such a minefield to even talk about, let alone write about. I’m nervous right now, just typing, about who I will offend. It’s like having to admit that you may be a feminist and with that comes a need to explain why.
So what is feminist art all about then? Many facets. Ultimately, it addresses the human condition of role and function.
Since we’ve taken a few evolutionary steps away from just being reproductive organisms, feminist art asks us to look at what the possibilities are for gender roles.
Don’t be afraid of feminist art. It’s not all about labial imagery or periods.
Think of it as ongoing debate on canvas. 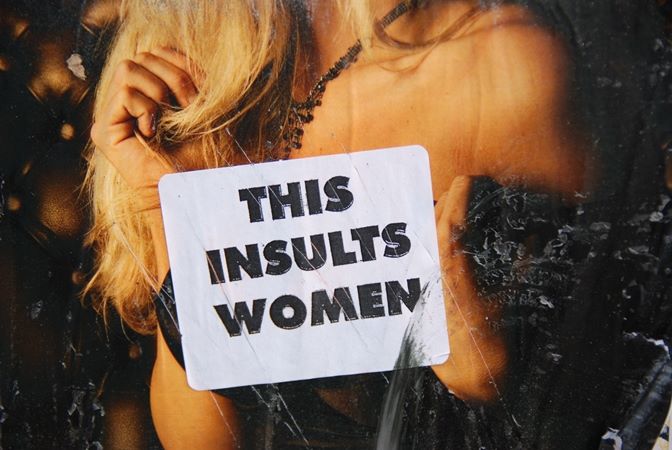