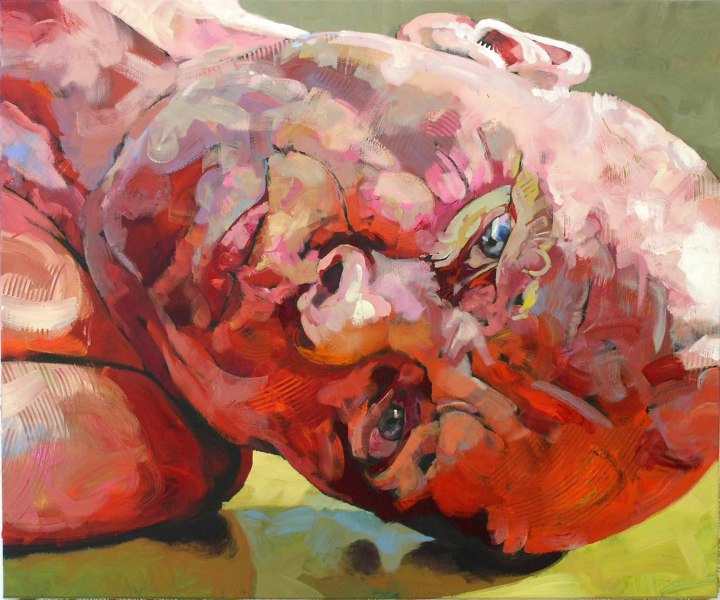 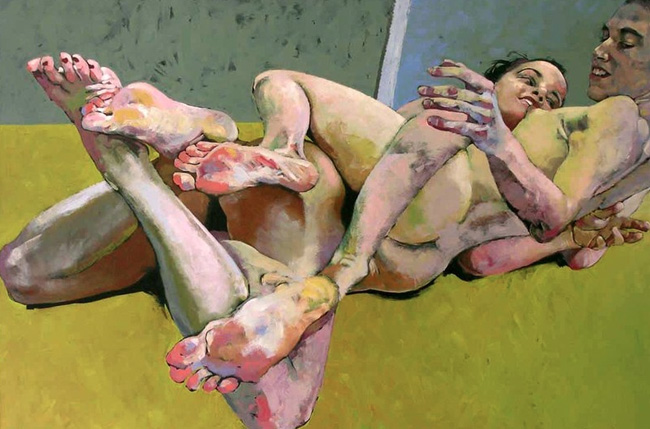 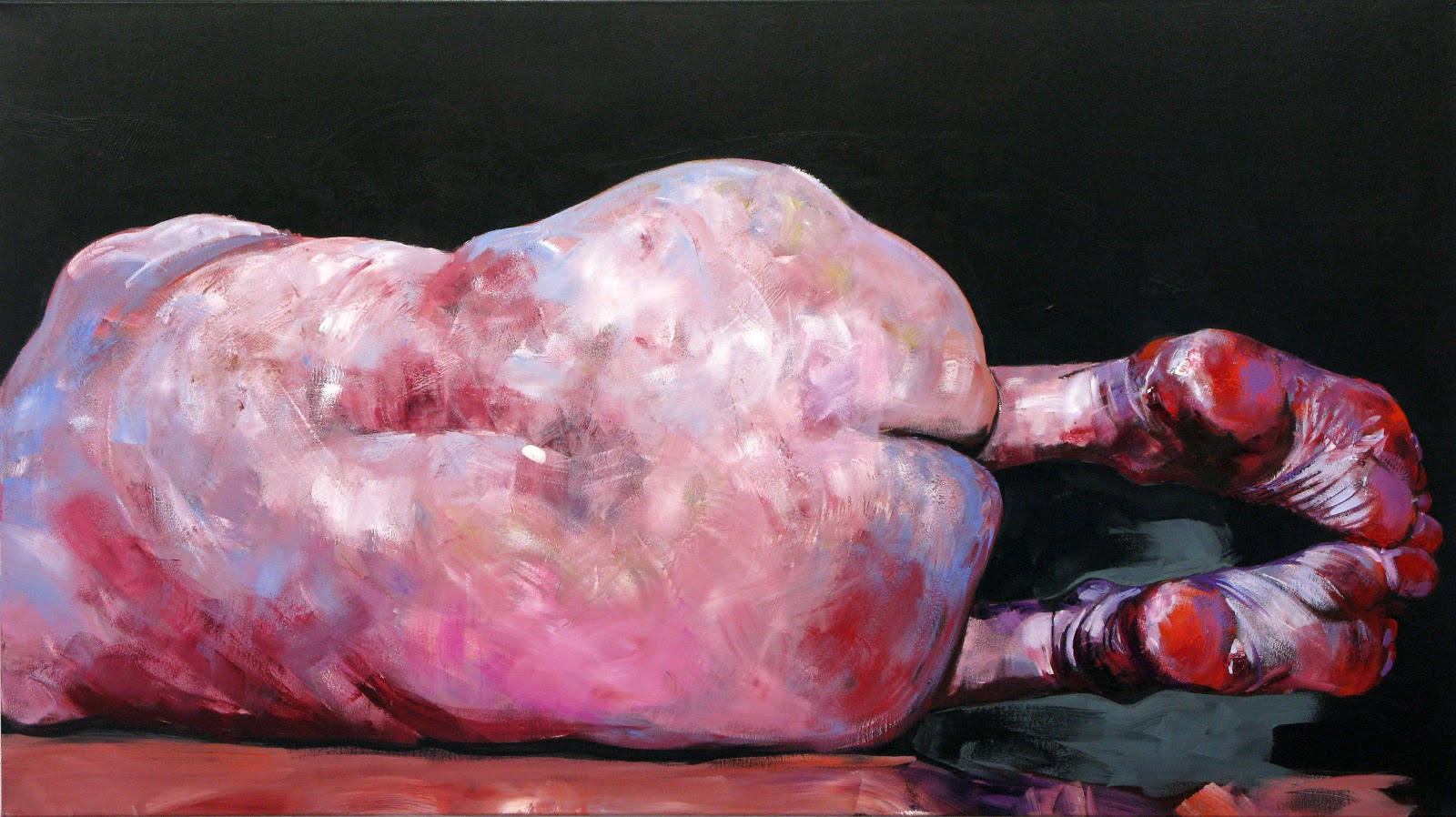 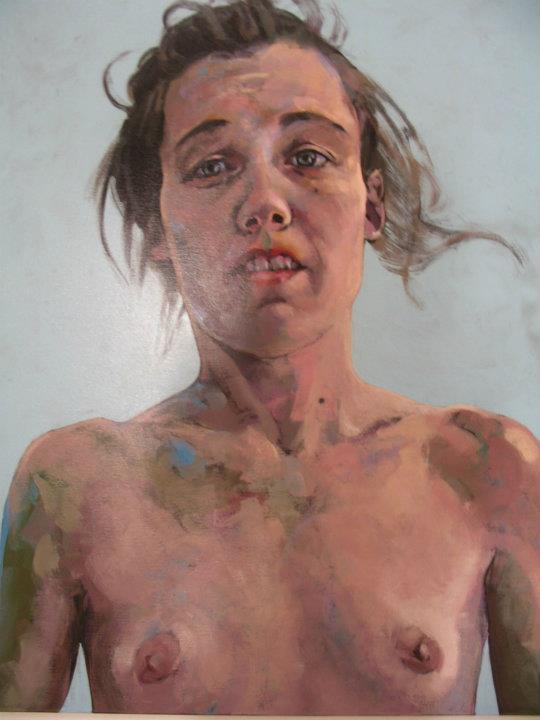 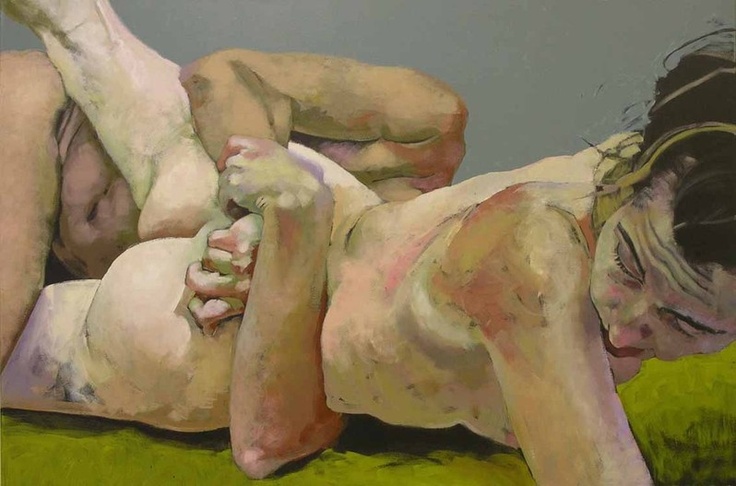 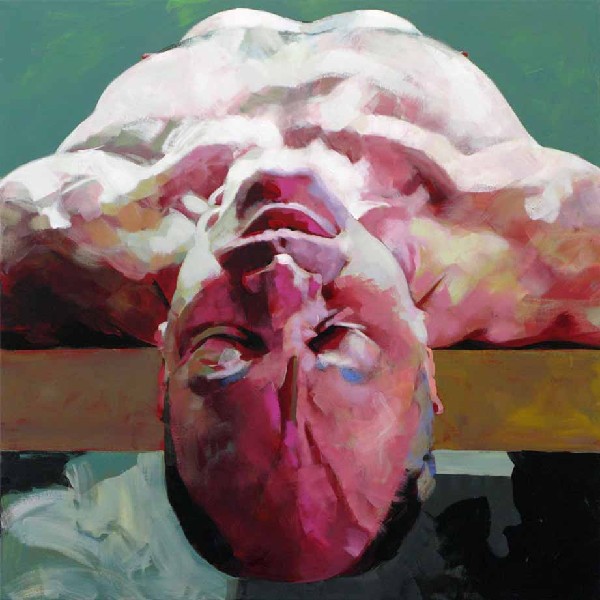 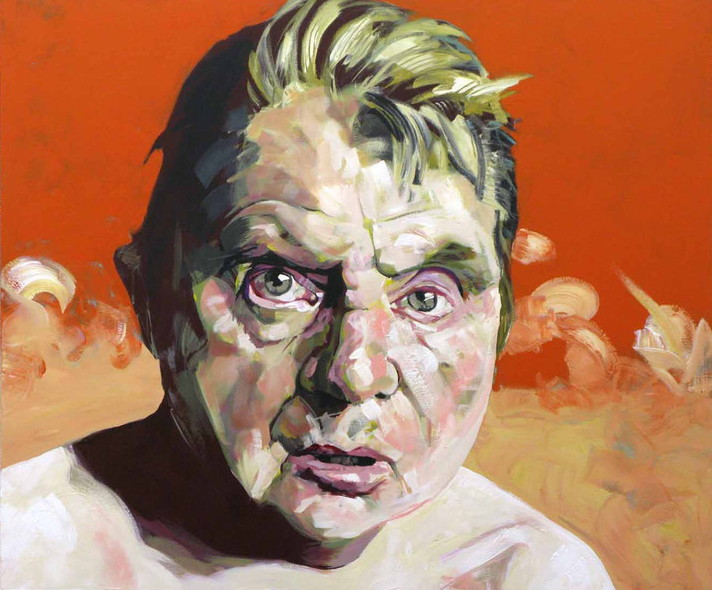 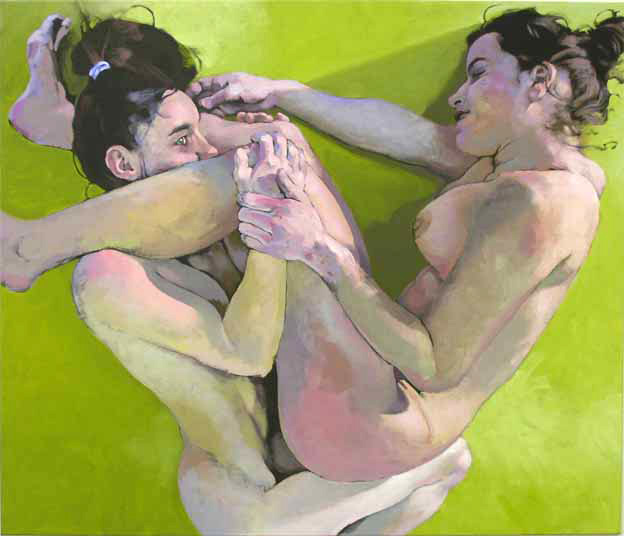 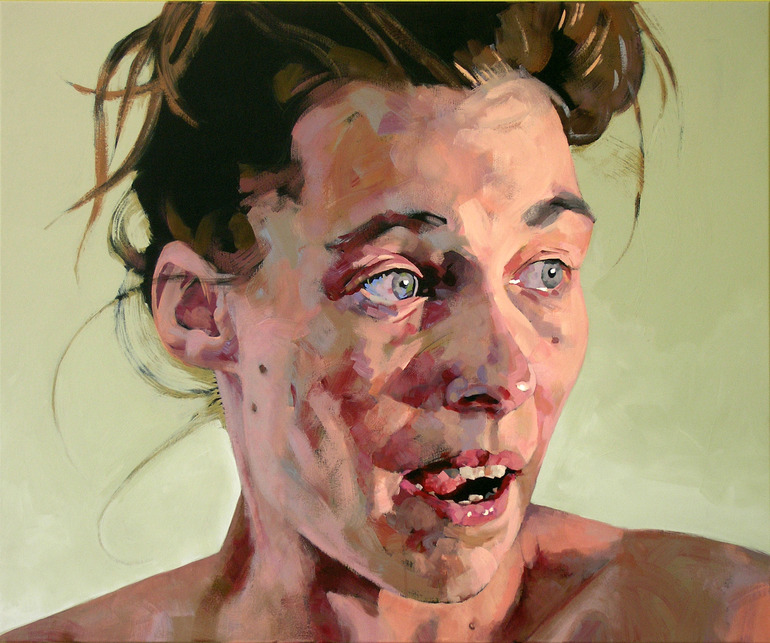 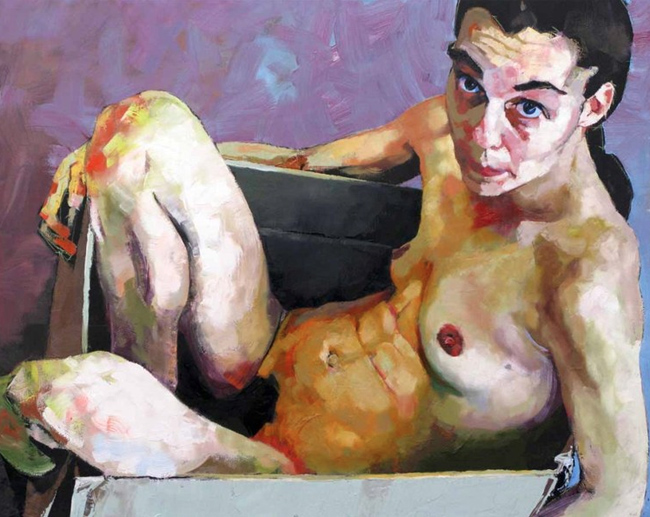 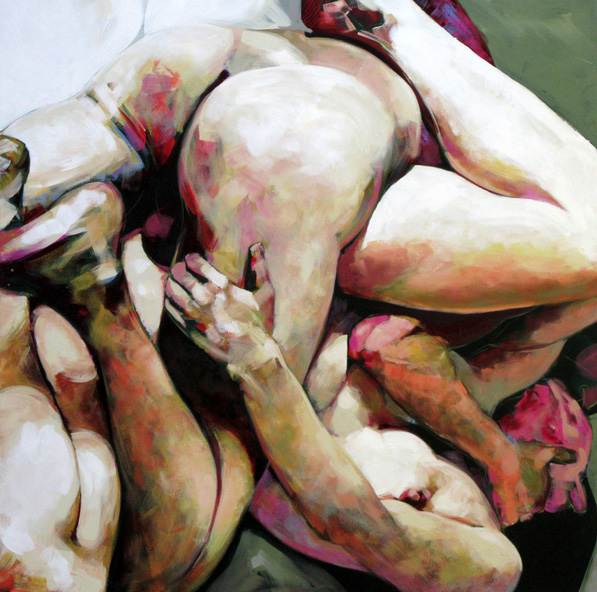 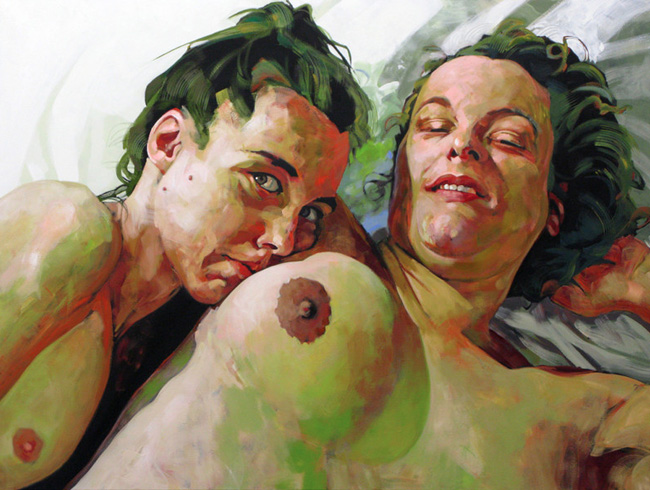 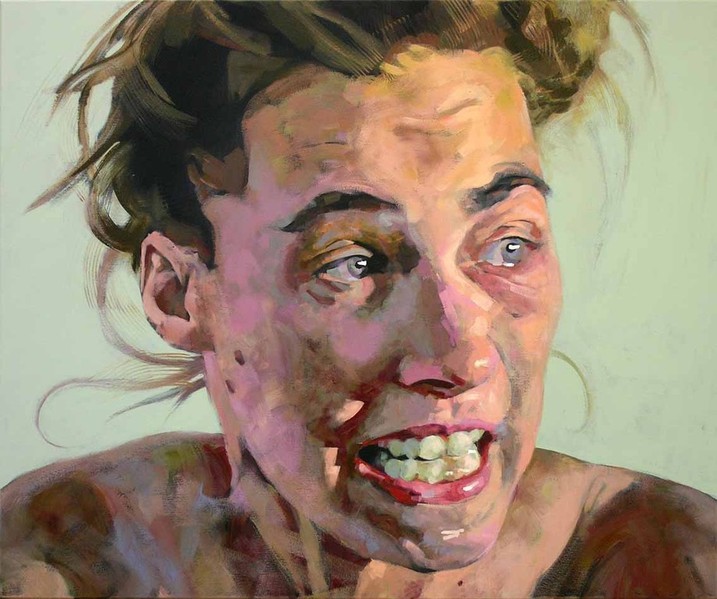 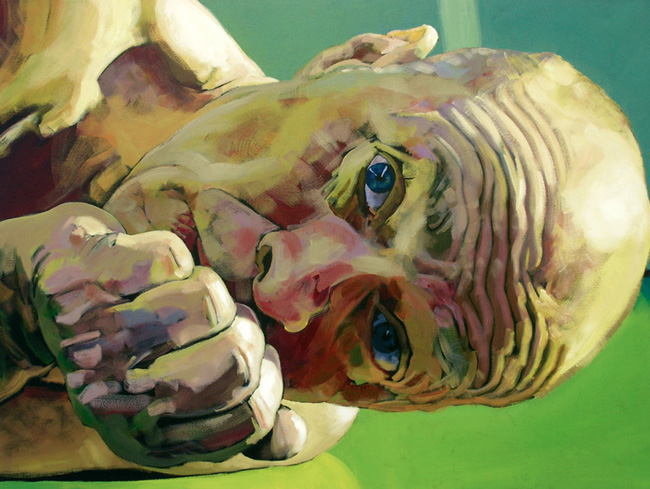 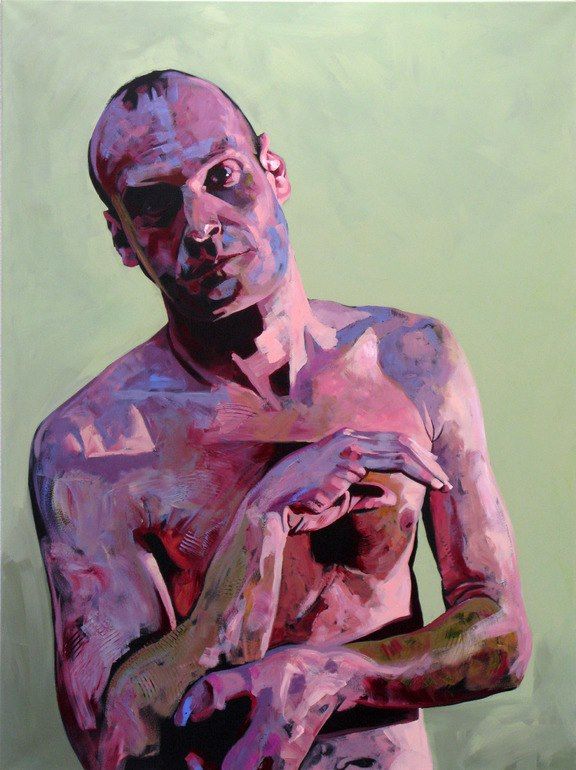 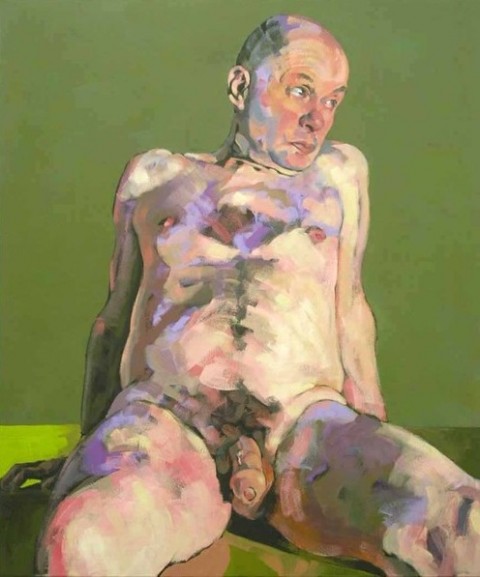 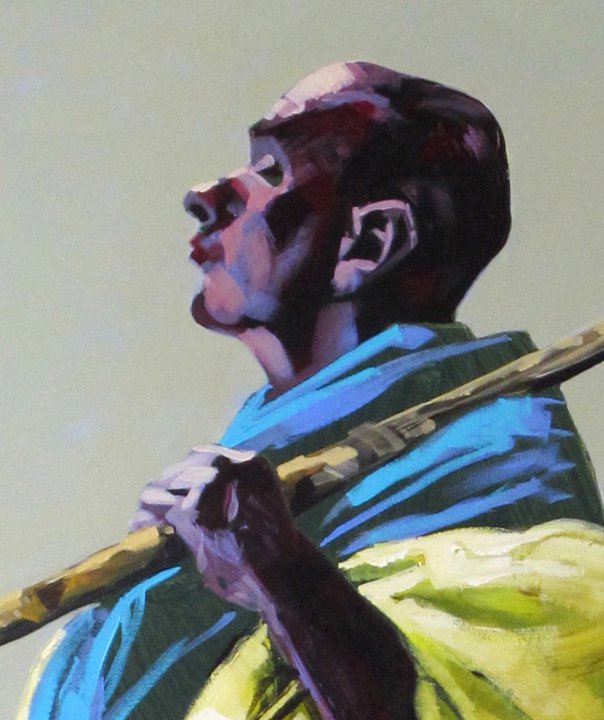 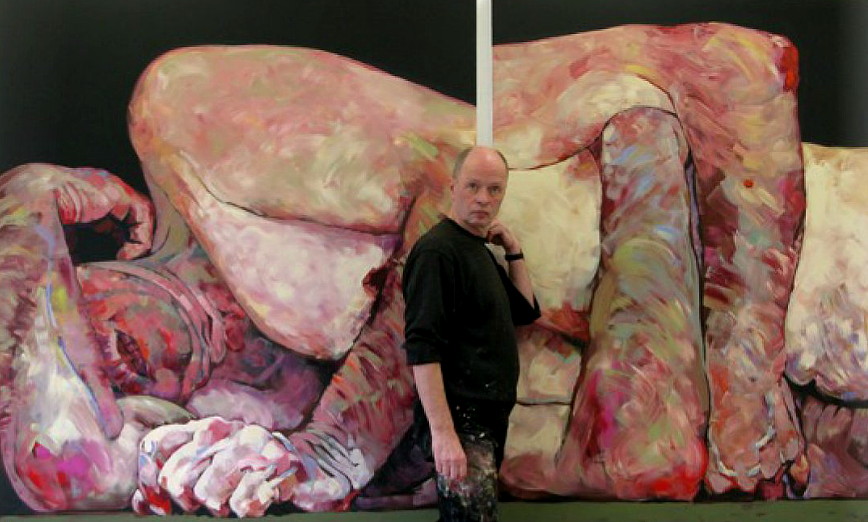 Born in Germany.Hanjo Schmidt works on the basis of photographs without actually copying them. He never gives the motif precedence over the process of painting in the way realism or, even more so photorealism does. He paints in acrylic and often uses a cheap brush applying paint in rather crude, fast strokes. His style is loud and dominant, the colours are based on what you can see but are often carried to an extreme. These are expressive paintings, and the act of painting pushes so to speak, the motifs to the background. Not for one second is there any doubt that Hanjo Schmidts art is about painting, about applying colours to canvas.The surprising thing is that even with these crude, raw brush strokes the model is defined in a perfectly precise way. Shining eyes, pupils with sharp contours, a sinewy neck or boney shoulder blades: everything is unambiguously defined, and yet this is a type of painting that does not attempt to create the illusion of a realistic one-to-one copy of the subject matter.The fact that we can always clearly recognize the subject matter yet at the same time know we are actually looking at a painting is a contradiction that is the real challenge in the works of Hanjo Schmidt.As you all know, we are constantly confronted by images that want to seduce. Whether they are advertisements, posters or other media images, the majority of the motifs are designed to be grasped quickly. The message is intended to be decoded in an instant and then remembered. Hanjo Schmidts paintings, on the other hand, resist the merely consuming eye. The faces disintegrate into individual sections, or units. The paintings develope a life of their own, formatating subtexts, establishing networks, seas of color and dancing lines. This is somewhat disturbing and irritating, and forces the viewer to dwell on the picture and to take their time to get to know it. Instead of fast consumption you have to pause and dedicate yourself to seeing.What is more, Hanjo Schmidt exaggerates expressively what he sees in contrast to the smoothing-out of commercial pictures with the help of Photoshop. He emphasizes and underlines everything the cosmetic industry would try to hide. These faces are not normed or standardised but belong to individuals. Thus Hanjo Schmidts paintings are the departure from the smooth evenness of the beautiful facade to the core of the human being in their essence..Even if the backgrounds are suptle and soft, the pictures still resonate in a minor key there is something pathetic and pitiful about these people. They seem to have been thrown into the world and somehow be at the mercy of themselves. You can sense the tragedy of the human being not only having to bear the world but also themselves. This is why dissecting the motifs into individual units of the paintings bears a corresponding meaning: The people that we encounter are not coherent entities, nor are they one-dimensional puppets in a standardised world but multi-faceted personalities full of contradictions.Thus the bodies and faces in Hanjo Schmidts paintings represent the human being per se: an ambivalent existence, beautiful and at the same time ugly, vulnerable and brusque, searching and denying, showing and hiding. Our look at the paintings is like a look in the mirror reflecting upon ourselves.Adrienne BraunExtract from the introduction to Faces, Weil der Stadt, 2008
Education:
Educated at the Staatliche Kunstschule and the Hochschule fuer Technik in Bremen, Germany.Living and working in Stuttgart/Germany.
Publicado por cromofora en 5:45